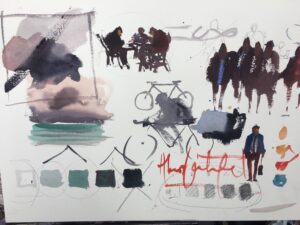 The third day and we are back in Valletta. Alvaro went first to Baracca Garden, a garden that overlooks the Three Cities. It was windy and Alvaro hesitated, he decided that we would paint there later. We went a bit into the city and Alvaro found a small square. He sat down and showed us how to make figures. He did a quick sweep of the brush, a messy bar. Then he put there heads and painted there legs and suddenly it became a group of people. Figures should be painted, not made with outlines. Train, do 200 per day.

He also showed that each picture will contain five degrees of strength, from white to the darkest dark. You should never just do a picture with only light scaling, which is easily done with watercolor. 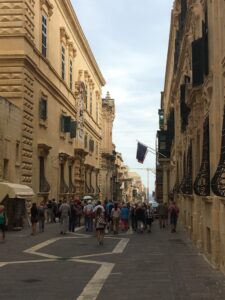 He then went to a street in Valletta, an impossible place with tall buildings on both sides and lots of people. He sketched quickly and then made a first wash of colors that flowed together. When it dried, he put on detail and did a great image. He faded a lot, made a distinct shade of red. Then he saved everything with a few characters and a car at the bottom. He was not really happy, muttering about the watercolor sketchbook. Personally, I think it was very good. Then we had a long time to do some painting by ourselves. I found a church near a narrow staircase that went down to a major street. It was raining and I sat under my umbrella, or rather, I had the umbrella over my paper, I sat in the rain. I did as Alvaro said, with interconnected buildings and light areas. I tried to use the full range, from light to dark. I placed the figures in front of the bright party to increase the contrast. I think it was okay. Alvaro forgot that he would comment on our pictures, he was to busy with himself.

On the afternoon Alvaro made a demonstration of the harbor from the Upper Baracca garden. Very difficult subject and it was not so good. He uses viridian green a lot. It’s amazing that he manages to put together a picture of such a difficult subject.
Day 4