I in middle stands Joseph, Angela is filming the demo to the right.

This day we painted Girona, a very beautiful city with old buildings and narrow streets. Joseph took us to a narrow passage with a long older staircase leading up to a big green church gate. 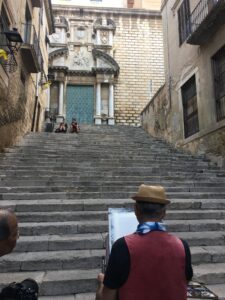 A very difficult subject. He sketched the gate quick and easy, straight on, without any thought of composition as it seemed. He was careful about the wide staircase, saying that there is no shortcut for stairs. You have to draw all steps. He painted everything with weak gray beige paint, left little white surfaces here and there. Then he let it dry. Then he painted from top to bottom, sometimes a wide brush stroke, but usually small lines, what he calls calligraphy. He added a person and then he made a shadow across. He worked a long time with the shadow to get it right. 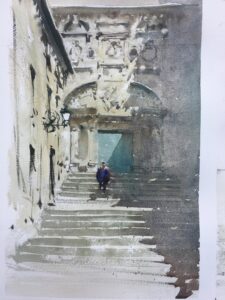 Then we would paint and I did not feel like painting the same thing, so me and Margaretha painted in the other direction, from the stairs downwards. Now, afterwards, I feel it was better to paint the same thing as Joseph, then I had learned more. After lunch we went to the famous bridge in Girona as so many famous watercolour painters has painted. Joseph made a “grayish” image towards the sky which he filled with many figures. If you have too much water in the brush and paint on wet it flows out. Joseph showed that you should have a thick color to paint on wet och moist paper. He mentions the different consistency of water, coffee, cream and Nutella. With Nutella you can paint on wet paper and colors remain.

Then it was up to us. We painted across the street, with the light in from the side. A difficult subject, with a shadow across the building. Joseph commented on my windows, never make the windows look the same, he said. They should be in the right place but never painted exactly the same. 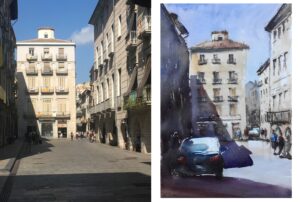 This is my attempt were the shadow became much bigger then I first wanted.

I also discovered the risk of painting outside. I did an okay sketch, it looked good. Long later, when I painted the shadow, it become much bigger and stretched across the building, on to the street. I painted as it looked right now and got completely wrong, it became way to big. My composition that I had in the beginning with was forgotten. 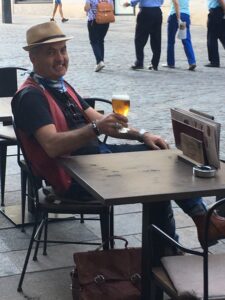 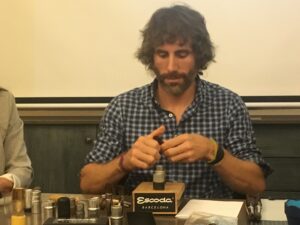 One of the Escoda brother making a brush

In the evening Escoda Brushes came to the hotel and showed us how they make the best brushes in the world. Fun and interesting to see.

Then there was dinner …. and guess what?

This site uses Akismet to reduce spam. Learn how your comment data is processed.